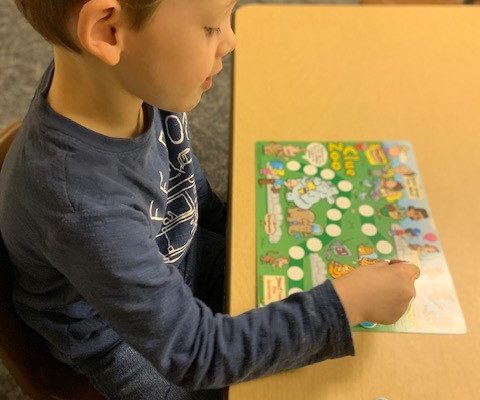 April is Autism Awareness Month. There are so many common misconceptions about what Autism is and what it isn’t. That’s because there are so many forms of Autism that professionals have deemed it a “spectrum disorder.” That’s also because everyone knows someone with Autism, and so they make assumptions about ALL people with Autism Spectrum Disorder (ASD). And, believe me, just as everyone has a unique fingerprint… every unique person who has Autism is different, too.

Every individual with autism between the extremes is still a valued member of this community, and they matter. That’s the bottom line.

In the past during Autism Awareness Month, I have introduced you to some of my adult friends with Autism. This time, though, I want to introduce you to a child in our early childhood program, Walter, and his parents, Drew and Ashley.

Walter participates in our Kindergarten Readiness class, but also spends time with our Special Education teachers and speech therapist. I see him almost daily, and I love it every single time. I try not to have favorites, but he’s just SO sweet and ornery, like me, that it’s really hard not to love him.

When I asked Drew about how they found out Walter had Autism, this is what he had to say, “We knew as parents that there was a delay of some type when he was about 1½ or 2 years old. We went to Eastern Schools to have Walter evaluated at age 3, and found out that he was, indeed, on the spectrum.

“Our initial reaction was shock and maybe a little denial. However, we are both quick to solve things and immediately started looking at early intervention options.”

That’s the key, folks! Early intervention. We stress that regularly at Bona Vista through our Positive Results and First Steps Therapy programs, our free developmental screenings that we host quarterly (courtesy of the United Way serving Howard and Tipton counties) and our weekly Wednesday mini-screenings (courtesy of We Care).

We also understand denial. You may have a suspicion that your child has some sort of delay, but an actual diagnosis seems like it would change things. And, you’re right. It will – for the better! At that point, you get a team of people who will come alongside of you to make sure you have information, resources and tools you need to give your child the best chance for success. At that point, you’re no longer in it alone.

One thing I loved that Drew said, though, was that “we knew what ASD was and how it can challenge the family, but we also knew that no one case is like the other. Walter was going to be unique to Walter and ASD is just part of his unique personality.”

Can I get an Amen? People are who people are regardless. A diagnosis or disability does not define who they are as people. That’s the most important thing that I hope to get across to you in the article if you don’t remember anything else.

So how do you move forward after an Autism diagnosis? Drew said, “There are certain obstacles in raising a child with Autism, but we are doing our best as a family to take them in stride and reach out for help when we don’t know what to do.

“It has certainly changed our family in challenging ways, but also in many good ways as well. Walter is uniquely Walter and our other son, Henry, who is neurotypical, challenges us in just as many ways as Walter does. It’s just different.”

Remember when I mentioned that one of the things I love about Walter is how sweet and ornery he is? Well, he’s also SO incredibly smart. If you don’t give him the chance to think about what he’s going to say and formulate his words, though, you’ll miss out on it! And his memory… WAY better than mine!

When I asked Drew about this he said, “He loves to read! One of the amazing gifts that Autism blessed him with is the ability to read far past his age level. We read chapter books together, and he can sound out words and even read with inflection. It doesn’t shock us anymore. It’s just become a part of our life that he can read, but it always makes us laugh when we see the stunned look on some else’s face when he reads something for them.

“When we are out in public together it’s so hard for him to stay with us because he’s reading every sign or employee’s nametag. He loves learning new things and absorbs information like a sponge.”

Walter is 4 (He turns 5 this month)! I didn’t mention that earlier, but when you hear about him being able to read chapter books… IMPRESSIVE! But, reading isn’t the only thing Walter loves. He’s a tinkerer (is that a word?)! “He loves technology and can figure just about anything out by watching once or simply figuring it out on his own,” Drew said. “He loves basic robotics. We have a Cozmo robot at home and he loves doing basic codes to give the robot a series of commands. He will get so excited that he laughs and claps to the point that we have to make sure that he’s not getting over stimulated. It’s so fun to watch!”

So what does he think Walter will do when he grows up? Because he is a kid and they do that regardless of having Autism. “We could see him someday being an advocate for people with Autism,” Drew said. “The beauty in which Walter sees the world has to be voiced somehow! He’s so incredibly smart and he could easily find success in the tech or engineering fields, too, but we think that advocacy will definitely play a role in his future somehow.”

That makes my heart melt. I hope it encourages you, too. If you’re a parent or grandparent of a child with Autism, there is strength in numbers! Reach out for help. Don’t get discouraged. Don’t look at ASD as a disease to be cured. Don’t look over the joys and unique gifts of your child because you’re focused on the challenges. There will be hard days. But, there will also be so many great days, too! Don’t miss them.

I know that’s a lot of information about Autism, early intervention and Walter. So, let me land the plane with this – Walter is a person, a child. He just happens to have Autism and needs additional supports. His mom and dad just happen to be nearsighted and need the support of glasses. You are a person. There are times you need additional help. We are ALL people.